Napoleon’s army is struggling on its retreat. Its horses are dying, ill-fed and weakened. As the goods train falls apart, the rear-guard destroys wagons and armament to prevent it falling into Russian hands. On October 24, 1812, the army reaches Chirikovo where it leaves the old Kaluga road. The terrain is muddy after incessant rain, it is impossible to march any significant distance, and the losses of the army worsen day by day.

One unit is in the midst of ridding itself of armament when a passing gendarme accidentally drops his pistol. The sparks from it detonates the powder and the explosion kills several men. Many more are badly burned and perish over the next few days in hideous suffering.

On the road between Moscow and Kaluga, by C. W. Faber du Faur.

By October 24, Kutuzov has caught up with Napoleon’s vanguard near the town of Maloyaroslavets. The battle here is furious and the little town changes hands several times, and is almost completely destroyed. 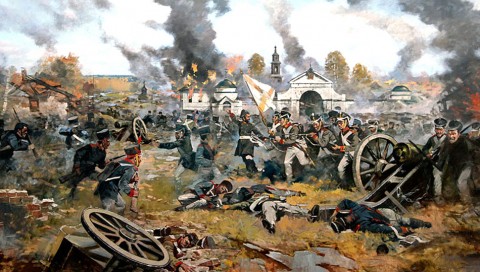 Fighting at Maloyaroslavets, by Oleg Avakimyan 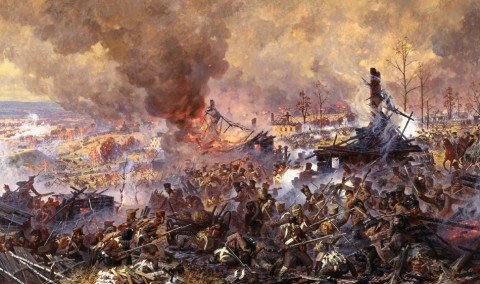 Fighting at Maloyaroslavets, by Alexander Averyanov. 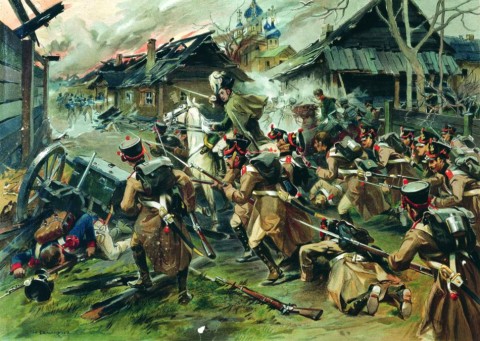 Battle of Maloyaroslavets, by Mykola Samokish

The battle eventually turns in the Russians’ favour. The French general Delzons who leads the vanguard and attacks the Russian positions is dead. 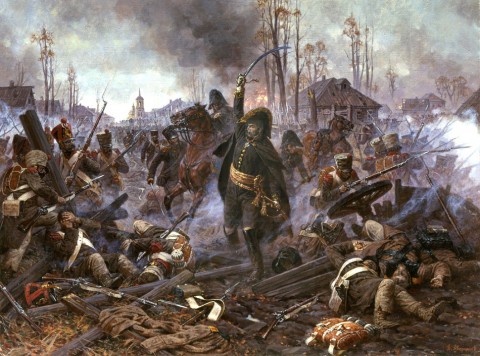 General Delzons at the battle of Maloyaroslavets, by Alexander Averyanov.

Thousands of men perish, but Kutuzov now commands the heights south of Little Yaroslavets, and can block the Grand Army’s path to Kaluga, where Napoleon hoped to replenish his food and supplies.</p

Still, there was damage – the Kremlin suffered the destruction of the arsenal, the commandant’s house, some of the palace, the extensions to the belfry of Ivan the Great, and the Alexeyevsky Tower. Much of its treasure was looted. Here is a sketch by the architect A. N. Bakarev.

Mortier left Moscow with his rearguard, and the city was reoccupied by Cossacks under the Ilovaisky brothers (their original commanding officer, Wintzingerode, having been captured by Mortier earlier). The painting below by I. Ivanov somewhat exaggerates the Cossack incursion – when they arrived in Moscow, there was scarcely any trace of the French.

Ilovaisky’s light cavalry chases out the remaining Frenchmen from Moscow (22 October 1812), by I. Ivanov.

From the surviving churches, the bells rang out, and mass was celebrated at the Monastery of the Passion. 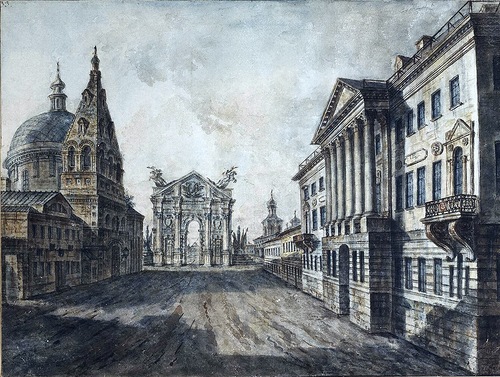 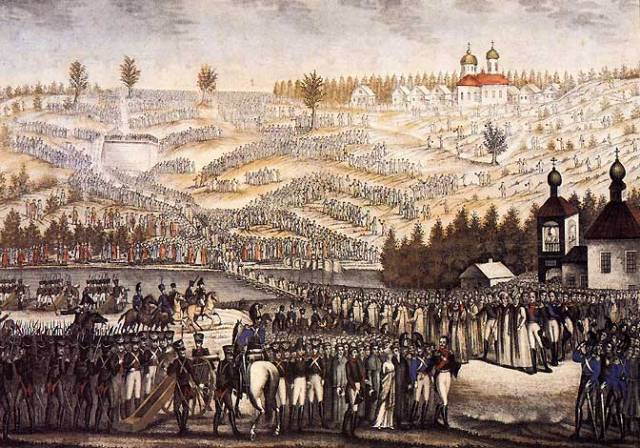 Christ the Saviour Cathedral from the Sparrow Hills (12 October 1817)

Napoleon set out with his Grand Army, about 116,000 strong and heavily laden with goods and loot, on the old Kaluga road. Although the area was bristling with Cossack irregulars, he was – quite remarkably – unnoticed. In a diversionary tactic, he sent a letter (ostensibly drawn up in Moscow) to Kutuzov offering to continue battle according to the accepted principles of war. He also wanted to make sure that Kutuzov was still in Tarutino. Napoleon managed to get to the new Kaluga road by Fominskoye, still unbeknownst to the Russians.

Meanwhile, in the region of St Petersburg, a Russian army under Wittgenstein was attacking the French under St-Cyr at Polotsk, the second battle of the war in this region. Between 18-20 October 1812, they managed to overrun the enemy defenses, and pushed them into the town. The French began their withdrawal from Polotsk in the silence of the night.

Unfortunately for the French, one of their marshals decided to set fire to the barracks so that the equipment they were leaving behind was useless to the Russians. Wittgenstein, seeing the flames, realised what was going on and ordered his troops to storm the town. Vicious hand-to-hand fighting ensued. The French were defeated; the battle cost enormously in lives and injuries on both sides. 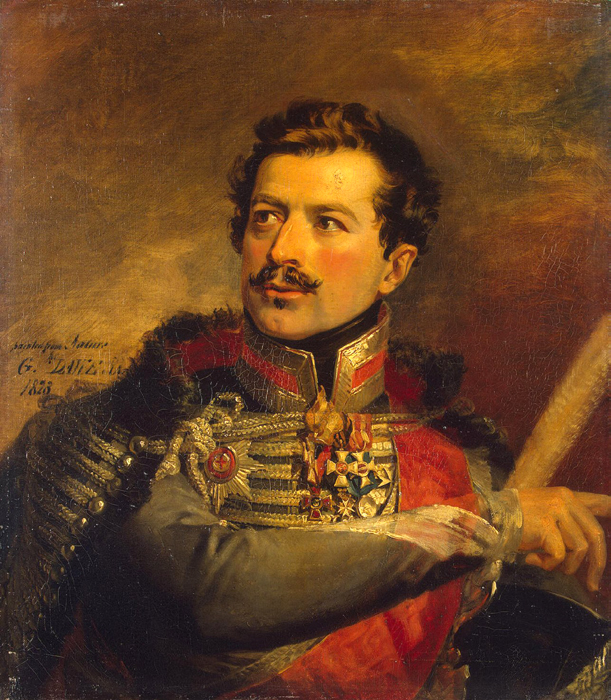 On the 22nd, Napoleon’s army was discovered by a team of scouts led by a captain Seslavin, who conveyed the news to Kutuzov. The old Field Marshal was beside himself with excitement. He declared, ‘From this moment, Russia is saved.’ He ordered one of his generals to race to Maloyaroslavets (where Seslavin had spied the French), and set off himself to intercept Napoleon at Kaluga.

The wounded streamed into Moscow, along with the horrific news that Kutuzov, Marshal of the Russian forces, had ordered a retreat from Borodino.

The War Wounded Arrive in Moscow, by A. P. Apsit.

Factories and shops closed as panic spread across the great city.

The citizens initially waited for the city administration to provide some sort of guidance. But events were overtaking them. At Fili, the Russian general staff had convened a council and decided to abandon the city so as to save the rest of the Russian army.

The hut at Fili, by Alexei Savrasov.

The Moscow administration ordered a general evacuation. Four thousand wagons and 17,000 people trooped out, including the firemen with all their equipment.