Happy All Fools’ Day, everyone.

You may have seen that Google Maps has put the Pacman game at various locations on the map today. For example, check out the front lawn of the Taj Mahal. Are there similar Pacman games anywhere in Russia?

In the 1930s, Russian-born sculptor Naum Gabo started experimenting with a thin, plastic material called celluloid. Previously used as film for photography or to make cheap jewelry, celluloid in Gabo’s hands became translucent geometric structures that were often suspended in mid-air. Art critic Herbert Read wrote that Gabo was using “new materials…[for] a new generation to create with them the monuments of a new civilization.” His pieces made their way into the top art collections in the world.

But by 1960, the plastic had begun to warp and crack. Gabo didn’t know it when he started using celluloid, but it is an extremely unstable and reactive material, and was infamous for catching fire in movie theaters. Despite conservators’ diligence to try to preserve his works, the plastic became too brittle and the sculptures collapsed. Gabo himself called many of them irreparable.

Alexandra Ossola, “How to Make Art That Withstands the Test of Time” in Nautilus, March 24, 2015.

Alexander Davidovich Zaliouk (1887 – 1971) was a Jewish artist, illustrator and sculptor, a member of the École de Paris, and a doyen of the Art Deco. He was born in an impoverished family in Radomysl, Ukraine, and studied at art schools in St Petersburg and Odessa. His early career involved illustrative work for magazines such as Krokodil (1911-12), Southern Weekly (1912-13), and the newspaper Southern Thought (1911). He signed his works Sacha, or Sach or AZ. He participated in exhibitions of the Association of Southern Russian artists in Odessa (1908-12).

In 1912, Sacha moved to Paris and settled in Montparnasse. He continued his education at the École Nationale Supérieure des Beaux-Arts, training under Raphaël Collin and François Flameng. In 1914, he enlisted in the French army and fought at Verdun.

In 1921, he participated in the First Russian Exhibition of Arts and Craft at London’s Whitechapel Gallery. He also took part in the Salon d’Automne (1926) as well as the Society of Artists’ La Horde de Montparnasse (1927).

Zaliouk became a member of the Salon des Independants in 1951, and of the Parisian salon of the National Union of Arts in 1954.

Beauties by the mast.

Nearly the end of the year, folks, and time for yet another roundup of Russian and related art.

And that’s it for the roundups of the year!

Part 2 of paintings displayed at the St Petersburg Gallery, London, in their Russian portraiture exhibition. 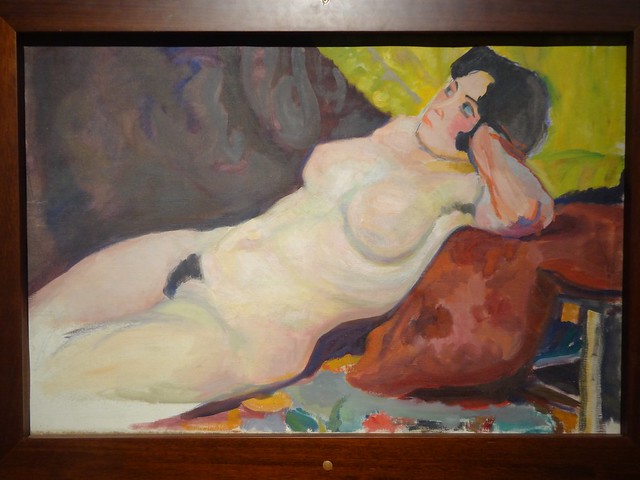 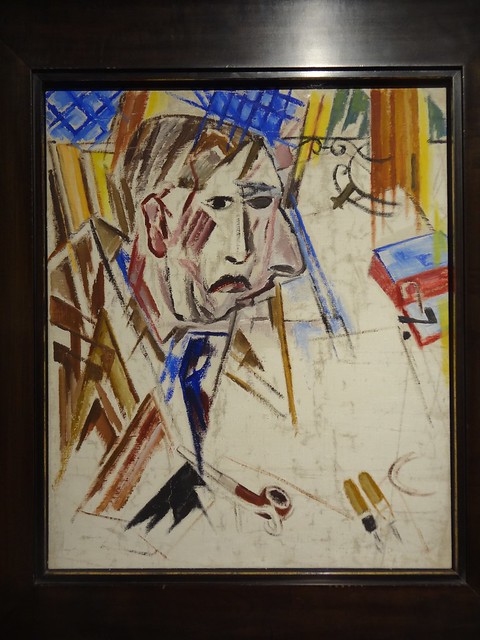 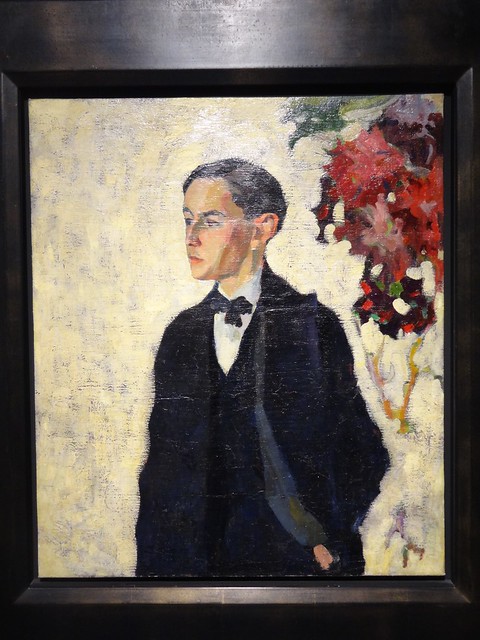 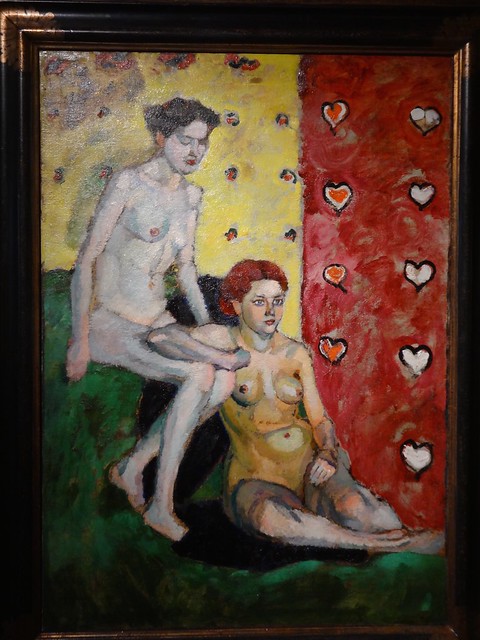 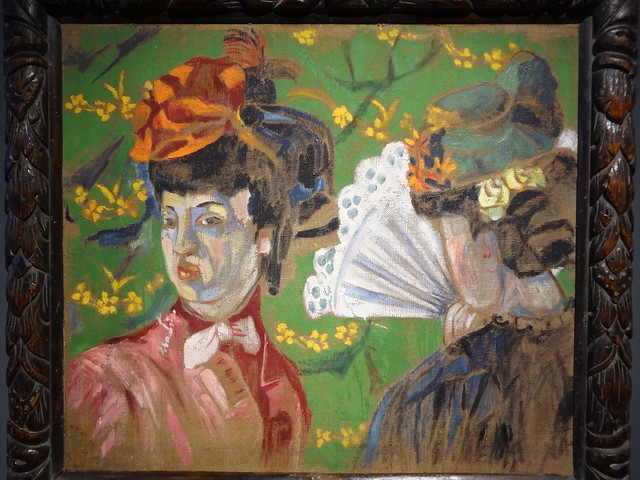 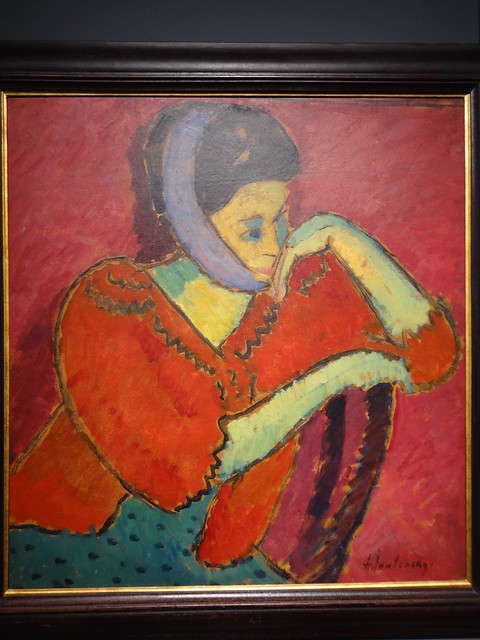 Alexei Kondratyevich Savrasov was born May 12, 1830 to a merchant family in Moscow. From early age, his talent at art were evident, and he was already producing landscapes for sale as an adolescent. Against the wishes of his father, who wanted him to join the family business, he started at the Moscow School of Painting and Sculpture in 1844.

The early landscapes of Savrasov were in the tradition of the academy. In A View of Moscow from the Sparrow Hills (1848) and A View of the Kremlin in Inclement Weather (1851) one can observe the external influence of Romanticism. However, Savrasov’s keen powers of observation and sincerity of emotion manifest themselves in these landscapes. Over time, the artist devoted himself to a study of the character of the Russian landscape, and sought to convey the beauty of his native land.

Savrasov was one of the members of the art collective ‘The Wanderers’ (1870). Many of his works which were exhibited along with his fellow Wanderers were painted by him in the Volga region. Savrasov also travelled in Nizhny Novgorod and Kazan, but he much preferred the region between Yaroslavl and Kostroma. In 1871, on the Volga, he created a number of studies for the best of his works including the paintings Pechersk monastery near Nizhny Novgorod, and The Rooks Have Arrived – which have become the most popular Russian landscapes, a symbol of the country.

The Rooks Have Arrived, by Alexei Savrasov

Besides his artworks Savrasov fruitfully engaged himself in teaching activities. He led the landscape painting class at the Moscow School of Painting, Sculpture and Architecture, and among his students were Konstantin Korovin and Isaak Levitan.

By the late 1870s, the artist was ill, and his art reflected his decline. His last decade of life was spent in deep distress. He died on September 26, 1897 in Moscow. Isaak Levitan wrote: One of the most profound Russian landscape artists is no more. From Savrasov emerged a lyricism in landscape art and a boundless love for his native land. Truly, the late Savrasov created the Russian landscape, and this, his undoubted merit, will never be forgotten in the field of Russian art.

The Pechersk Monastery near Nizhny Novgorod.

A view of the Kremlin in inclement weather.

Here we are deep into autumn and the Festival of Russia in the UK continues with some remarkable art on display. Only a month or two remain to catch whatever you can, so make those days count!

So here we are among the works by artists originally displayed as part of the Jack (or Knave) of Diamonds exhibition in Moscow. The notes for each painting are taken from the exhibition cards of the Courtauld Gallery, London.

Mikhail Larionov’s (1881-1964) work below was displayed along with Still life in a Major Key at the Golden Fleece exhibition in Moscow in 1910. The Russian avant-garde artists had an abiding interest in the union of music and painting. 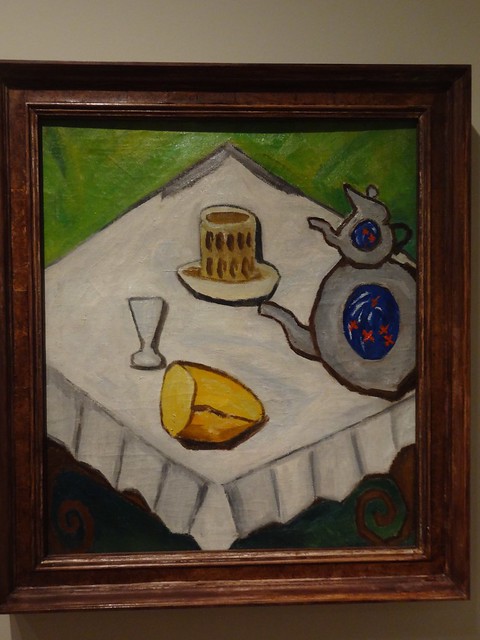 This painting was in the first Jack of Diamonds exhibition in Moscow from December 1910 – January 1911. “The nude female bathers form a scene similar to the works of the German Expressionist group the Bruecke (Bridge). Larionov’s use of red-orange and green, opposite colours on the colour wheel, define the figures with a jarring, clashing force.” 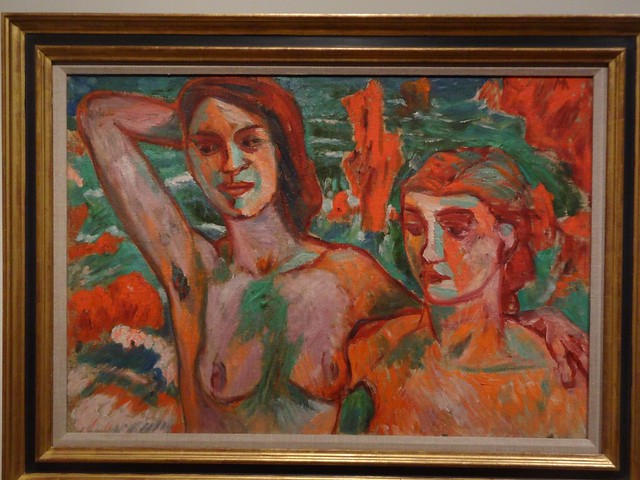 Aristarkh Lentulov (1882-1943) returned to Moscow and painted this based on his impressions gained from his Parisian life among the French avant-garde. “The artist uses a radical style to depict a very traditional subject, giving the roses a monumental quality through his layering of petals and bright blocks of colour.” 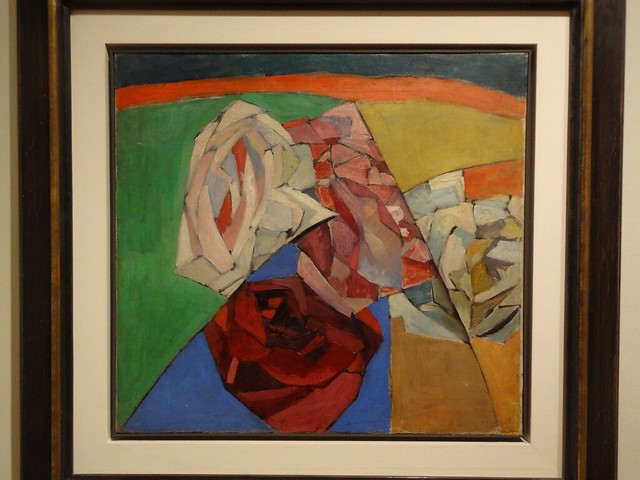 Natalia Goncharova’s (1881-1962) series of harvest paintings appeared between 1908 and 1911. She imagines a scene of cypresses and pink mountains, and the women’s outfits are unlike those she usually depicted Russian paintings in. Apelsinia was a name she invented for her solo exhibition in 1913 in Moscow. “The work reveals her taste for the exotic and interest in the art of Paul Gauguin.” 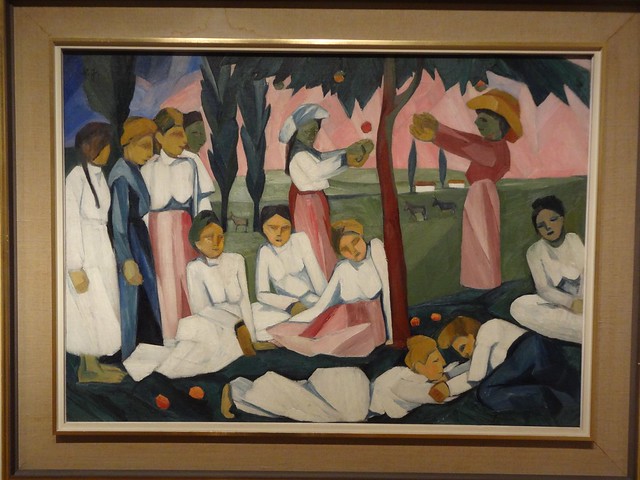 Vladimir Burliuk (1886-1917) was influenced by Cezanne and Cubism. “He often fractured his paintings into interlocking irregular segments, as if translating the principles of stained glass onto canvas.” 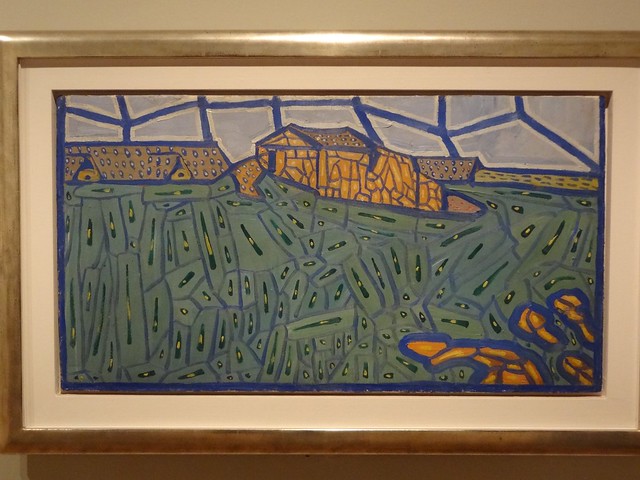 Olga Rozanova’s (1886-1918) typical style of simple and energetic brushwork and bright colours is exemplified in this work, executed three years before her death. The playing cards theme was one she returned to throughout her life, “emphasising that her art was based on card games often played in streets, bars and funfairs.” 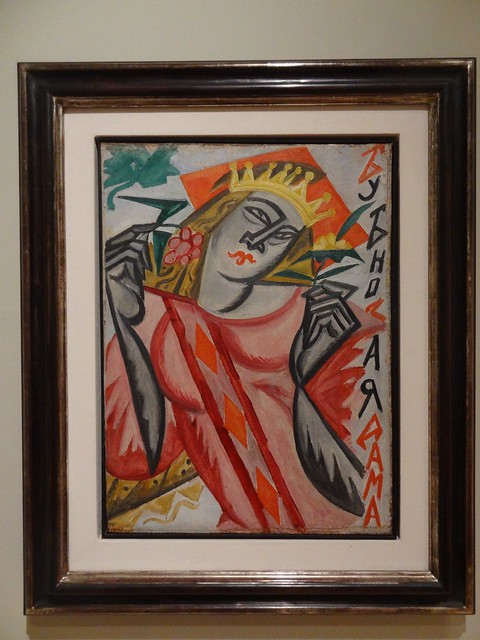 Innokenti Annenesky’s play Thamyris, The Cither Player (Famira Kifared) was staged at the Moscow Chamber Theatre to Alexandra Exter’s design, which incorporated traditional art of her native Ukraine and referenced ancient Greek friezes. “With their graphic clarity and arrangement of bold colours, Exter’s designs contributed to a rhythmic framework shaping the performance itself.” 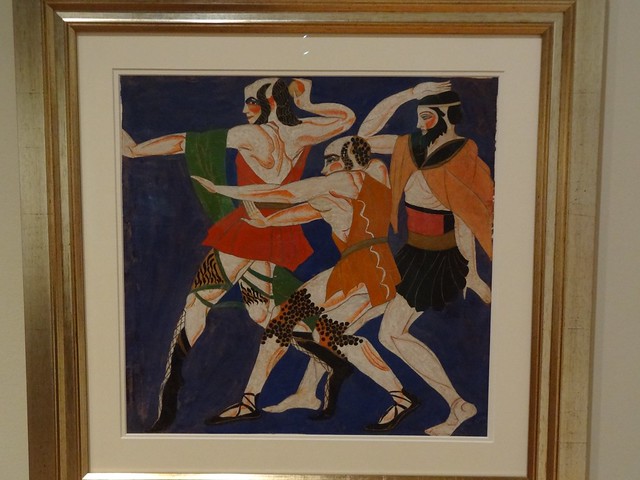 This was a design created by Goncharova for the astronomer Magus in a ballet (Liturgie) that never saw the light of day. Here she displays her interest in Russian folk art, peasant embroidery and icon painting. She was at the same time beginning her fruitful collaboration with Sergei Diaghilev and the Ballets Russes. 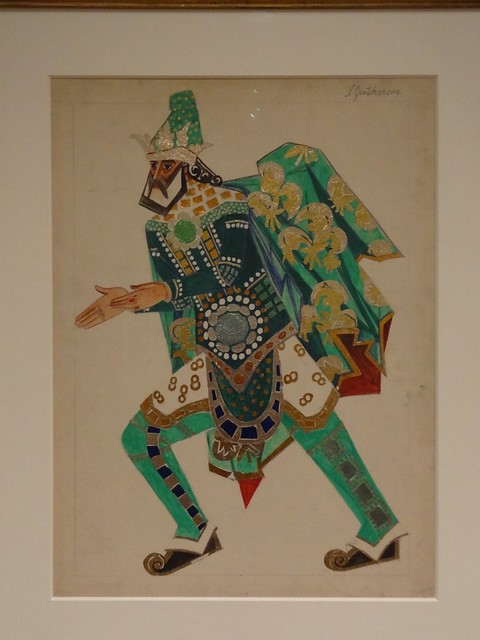 This is a film by the avant-garde Russian film-maker Dziga Vertov, the pseudonym of David Kaufman (1896-1954). Titled Советские игрушки, it was the first Soviet animation. It came out in 1924, the year of Lenin’s death.

Dziga Vertov was among the first cartoonists in film history. Among the animations that came out in the 1920s, the majority were severe, grey, political works – almost entirely of propaganda. This is not the sort of thing you would show your children. The protagonist – a middle-man grown rich on the New Economic Policy and therefore reviled by the proletariat – eats an enormous feast, then consumes a barrel wine. The motion of the wine into his mouth is indistinguishable from vomit. He then collapses onto the floor, unable to get up. A woman appears, dances and jumps into his stomach. There is a mockery of religion, the dead church represented by an orthodox prelate and a live church represented by a provincial parson. The churches fight each other for the attention of the bourgeoisie. A worker appears,  attempts to cut up with scissors the bloated class enemy, merges with a peasant into a Janus-like figure that takes his ill-gotten money to found a national bank. At the end, the Red Army executes all the priests and bourgeoisie, hanging a noblewoman by her skirt and the rest by their necks. The workers and peasants climb upwards. Everything then turns into a Christmas tree.

(Text below is from the St Petersburg Gallery’s exhibition notes for Russian Revolution in Art, Russian Avant-Garde: 1910 – 1932, running in London till September 20, 2014.)

Vyacheslav Levkievsky’s painting Tramway was displayed in the 1914 exhibition N°4, a show that (Mikhail) Larionov described as uniting artists that were ‘not in any way related to each other apart from their youth, their forward-looking vision and their problem-solving approach in the realm of painting while nevertheless being like-minded in their thoughts and feelings’.

Sketch for the painting “Battle”, by Aristarkh Lentulov. (1913).